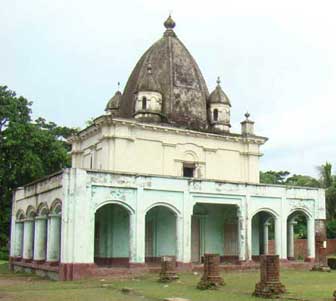 History : Jeshoreshwari Kali Temple is a famous Hindu temple in Bangladesh, dedicated to the goddess Kali. The temple is located in Ishwaripur, a village in Shyamnagar upazilla of Satkhira. The name 'Jeshoreshwari' means 'Goddess of Jeshore'. Jeshoreshwari is regarded as one of the 51 Peeth of Sati; according to the belief, it is where the various parts of Sati's body are said to have fallen, in the course of Shiva's Rudra Tandava. Jeshoreshwari represents the site where the palm of Sati fell. Legend says that the General of Maharaja Pratapaditya discovered a luminant ray of light coming from the bushes, and came upon a piece of stone carved in the form of a human palm. Later, Pratapaditya started worshiping Kali, building the Jeshoreshwari Kali Temple. As to be the 'Goddess of Jessore', it was named after Jessore. It is believed to have created by a brahman named Anari. He created a 100 door temple for the Jeshoreshwari Peeth. But the timeline is not to be known. Later it has been renovated by Laxman Sen and Pratapaditya in their reigning periods.

Worship and Activities : The temple is visited by pilgrims from all over, irrespective of sectarian differences. Worship is done by the priest every Saturday and Tuesday at noon time. But before 1971, there was daily routine of worship. Every year on the day of Kali puja, the present Caretakers of the temple conduct a ceremony. There is also a Mela taking place around the temple compound.