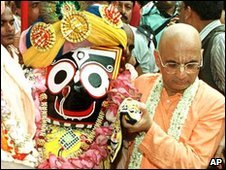 For millions of Indian Hindus, the temple is a place of worship and reverence. But as Krupa Padhy discovered during a visit to one of the country's famous temples in the state of Orissa, it can feel like stepping into a circus.

It is dusk as I approach the temple. A tired sun sinking behind the temple dome ought to mean a serene moment. But far from it.

I am walking up Grand Road in Puri - and grand it certainly is, but busy too.

Vegetable vendors, herdsmen, rickshaw drivers and food stallholders are all crammed in against a backdrop of brightly painted 18th Century houses piled on top of one another like blocks of Lego.

And just to add a bit of extra colour, they are plastered with posters of the latest Bollywood movie.

After all, even the most devout residents need a bit of time out.

I am told the Grand Road is one of the widest in India.

And it has to accommodate the two million worshippers who gather here in June for the annual Rath Yatra, or chariot festival.

On this day, statuettes of the three main deities are removed from their jewelled platform inside the temple and paraded along Grand Road. They call it their annual holiday.

I am led into the temple grounds by Rudr Narayan Kuntya, a chatty and knowledgeable chap who is dressed in the purest of white robes.

Inside, the first thing I notice is there are monkeys everywhere.

They are cavorting among the ancient temple structures, dancing on the domes, scouring the ground for food and hopping on the temple steps.

We move on to the temple kitchen. Here, if a dog enters the room, all food being prepared there must be thrown away.

As we leave the kitchen quarters, I notice a monkey squeezing itself through one of the grilles on the windows.
Dogs may be banned but monkeys have unlimited entry.

"They protect the deity," Rudr tells me.

I am told some of the astonishing kitchen statistics: 200 people prepare the food. There are 400 cooks and more than 10,000 diners every day. This really must be the world's largest kitchen.

Monkeys are not the only permanent residents of the Jagannath Temple in Puri - there are saddhus, or holy men, who are devoted to the study of the Hindu Vedas or sacred texts.

They perch on white balconies in their yogic poses and warn me against the likes of my guide Rudr. And as he takes me to what is known as the donation counter, I learn that his intentions may not all be holy.

His commission, it turns out, depends on the amount I donate and naturally he is hoping I will be rather generous. He leaves the counter a somewhat disappointed man.

Suddenly I find myself at the front of the crowd. I am sandwiched next to a group of elderly women, their heads draped in white saris.

Re: A Hindu temple full of surprises (BBC News) 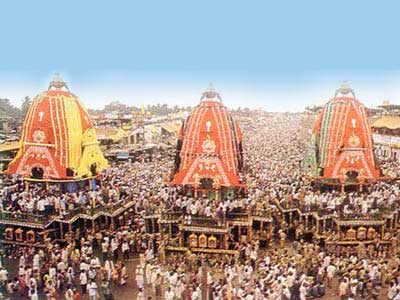 
As the curtains open to reveal the silver and gold statuettes, more people pour in eager to catch a glimpse.

Spiderman
The women erupt into a piercing round of yodelling.

This, they reckon, helps to ward off evil. The worshippers throw their hands into the air and chant the name of Jagannath, a word which translates as lord of the universe.

As we finish our prayers we join a crowd of hundreds of worshippers who are sitting on the ground staring at the temple dome.

It is flag-changing time. Like Spiderman, a priest dressed in an orange toga climbs 65 metres up the outside of the temple tower while facing the crowd.

The crowd bursts out into another wave of yodelling and religious chanting.

It is quite a show - a circus performance at the temple, a two-in-one bonus.

And clearly, the entertainment is hugely appreciated by those who have travelled great distances to be here.

Body is a temple

Leaving the temple grounds I spot a group of non-Indian Hindus who are praying with their heads down at the gates. 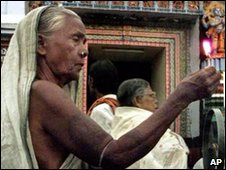 They tell me they are part of a Hare Ram Hare Krishna group from Russia.

I ask them how they feel about not being allowed to enter the temple grounds, after having travelled so far.

"We accept it," says one. "Getting this close is enough for us. Who are we to dispute the will of Krishna?"

The Hindu scriptures say you cannot convert to Hinduism.

The religion you are born into is the only one that will eventually take you to a better place. But another rule of Hinduism is that your soul is your god and your body is your temple.

Maybe this is why the Russians I met are so accepting of the temple's entrance policy.

And if my body really is my temple, then it certainly takes a knocking as I travel later in a cycle rickshaw.

An impatient lorry driver causes my rickshaw to swerve sharply. I am promptly tossed into the air and land by a vegetable stall.

Local people rush over to make sure all is well as the lorry driver makes a quick getaway.

I am all right.

The rickshaw driver is soon back at work on the Grand Road. And anyway, I have just been to the temple, so all is forgiven.